My parents got me an electric cookie press for Christmas! I was so excited to make cookies with it. Martha only has one recipe using a cookie press:

You guys, this was my first disaster. Read on…

I thought these would probably be a little boring, but they had a glaze, so maybe not.

I recently purchased the iPad Fridge Mount on clearance at Target. This thing is equally cool and terrifying. In an instant, my life could be ruined.

Step 2: Beat butter, sugar, and salt until light and fluffy

We’ve all seen this picture before. Moving on.

To the left, you’ll see the sign that once hung above the bar. It fell.

I think this is probably good.

Step 5: Load up the cookie press (also known as a ‘spritz’) 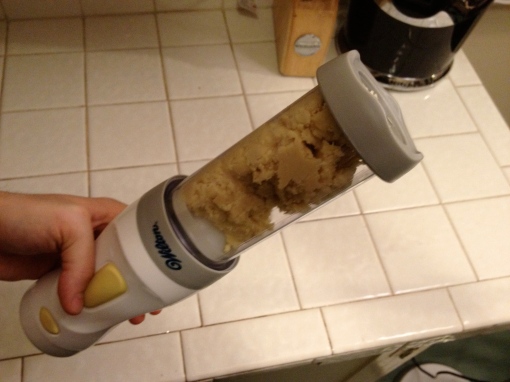 Here’s where it got tricky. Martha is very particular about sugar cookies. It’s “mix dough, chill, cut cookies, chill, then bake.” Wilton says DO NOT USED WITH CHILLED DOUGH.

Ugh. What do I do? I decided to compromise. I would load the dough in at room temp and then chill the cookies before baking.

There goes the plunger. Slowly. Down, down, down…

Squeaaaaaak, uhhhhhh, silent. It just stops. You’re supposed to lift up and the cookie will separate from the press.

No go. It’s still there.

Same thing over and over and over. It goes for a second and then stops. What the hell? Isn’t this thing supposed to be like having super powers? It is POWERED!

After a very long time, I managed to get 18. I had to use my fingers to pry most of them off of the press.

The sheet on the left is some of the of the crap cookies that came out. I even tried to press on a piece of parchment to see if it worked better. No.

At this point, I’m so angry that I’m yelling and swearing. I threw the baking sheet in the fridge, wrapped up the dough, and  threw a fit.

Meh, They were boring. Chalk this up as my first failure. The cookie press is being returned to the store.

I considered exchanging it for a manual press, but then decided that cookies from a press are old people cookies that are delivered in tins and never eaten.